Can we astrologers predict life changes? Those that are really »big«, those that lead to new, different life-styles and which we never forget? Changes like getting (or losing) a new partner, job, child, home…

It’s possible, of course. That’s what predictive astrology is all about! We can never be 100% sure that something WILL happen but if we use our best methods and techniques, we can be 90% sure – not just to predict but to help our clients get a better perspective of their years to come.

It’s always desirable that we »see« positive, constructive changes coming, of course. It’s never nice to see a bad, dissapointing period ahead. But we astrologers must be sincere and tell our clients of what »looms on the horizon« so that they can prepare. Be it good or bad, everything’s there in the »big plan«. We can never know whether we/our clients can/could change or reshape those »fates« shown in the »stars«; all we can do is to evaluate, as correctly as possible, the nature of the future planetary influences, and suggest the best ways to meet those energies and deal with them.

Astrologers use different techniques to predict those »crucial times«. My long years of researching and counselling have convinced me that the first and foremost technique for this purpose are the eclipses. The next (or complimentary) are secondary progressions, and the third are transits.

Sounds simple? It is, provided we know our techniques well. If we go about them carefully and properly, those techniques will not dissapoint us.

By means of a recent case from my practice – one of getting (and consequently losing) a new partner– I want to show how important it is to strictly follow the rules of interpretation.

We can’t put the carriage in front of the horse; it’s very important to proceed in the right order, so let’s repeat the order of the techniques:

Once you have evaluated the trend/s set by eclipses, it’s time to proceed to other techniques.

Before I had discovered the power of eclipses, secondary progressions were my main forecasting technique. They are very powerful indeed,but, as with eclipses, we need to be very careful with the evaluation of the nature and the timing of their expression.

A short (suggested) procedure of evaluating the progressed chart:

Transits act as »activators« and »timers«. Every planetary transit is subordinate to the main (greater, larger) scheme set by the eclipses and progressions.

Pay special attention to the transits of the planet – and to the planet – which has been (or will be, in the near future) eclipsed. Very often, the »predicted« event takes place when such a planet crosses one of the chart’s angles. Astrology students tend to overlook the importance of the angles, but they are crucial! Planetary energies tend to be »hidden« until they cross one of the angles and thus become directly expressed on the physical level. So, keep this »rule« in mind when you time your forecast!

Know also that eclipse configurations are often activated by additional lunations (those taking place in the course of the following year), and by the transits of the lunar nodes, Sun and Mars.

TANIA or A TRAGIC LOVE STORY

Let’s call her Tania. She’s a bodybuilder and a fitness trainer, looking great for her age. Venus, conjunct her Gemini ascendant, makes her beautiful and youthful, and, combined with her trained muscles, makes for a fabulous appearance.

Tania had won a couple of Miss Fitness titles before she was invited to participate in the Big Brother show in 2010 – the year which made her famous. The solar eclipse of July 11, 2010 was in an exact conjunction with her natal Sun, so it’s no wonder that she happened to be chosen for »the job«. Unfortunately, Saturn in the eclipse chart was in na exact opposition to her natal retrograde Saturn on Scheat, the »cursed« star, and in square of her natal Mars, co-ruler of the 11th house of group undertakings, so she was the first to have to leave the house. Her role in the society had been, however, transformed by this performance, and she became regularly featured in press.

As a divorced mother of one, she had prided herself of »waiting for the Right One«. She publicly declared that she hadn’t had a boyfriend for the last five years. Looking at her Sun in conjunction with Jupiter, the 7th house ruler, and its trine to Neptune, this man would really have to be Prince Charming. Would she meet him, and when?

The answer lies in the eclipses, of course. My research has shown that there is no meaninful life change which had not been shown/foretold by an eclipse!

Tania met her Prince Charming in late August of 2012. He was young, rich and handsome. Their first contact (virtual, via facebook) took place on August 23. It was followed by a meeting on August 29 and by the first kiss on September 7. After that, all followed »naturally«. Her lover’s Mars was in an exact conjunction with her Sun and they shared some other strong synastry contacts, but, alas, the man had Moon in Gemini in the falling (phlegmatic) phase, suggesting a changeable and labile personality which resulted in a typically »unfortunate« trait of the Gemini Moon – Tania was not his »one and only«! As she discovered a year later, he had been cheating on her, practically throughout their affair, with his other lover being a married woman. When she found the definite proof of his infidelity on September 27, 2013, she decided to end her life. She tried to commit suicide on October 4th and fell into a coma, but was rescued on October 6th, and moved out of his place on October 10th.

In a typically Gemini fashion, she was diligently posting pictures of their ideal union (fun, travel, candle-lighted dinners etc.) on facebook throughout their romance, and when all was over, her friends and the media also learnt all the details about her dissapointment and the unfortunate suicide attempt.

FIG 1: Tania’s natal chart with most of the main planetary influences which shaped her life during the year of her love affair. 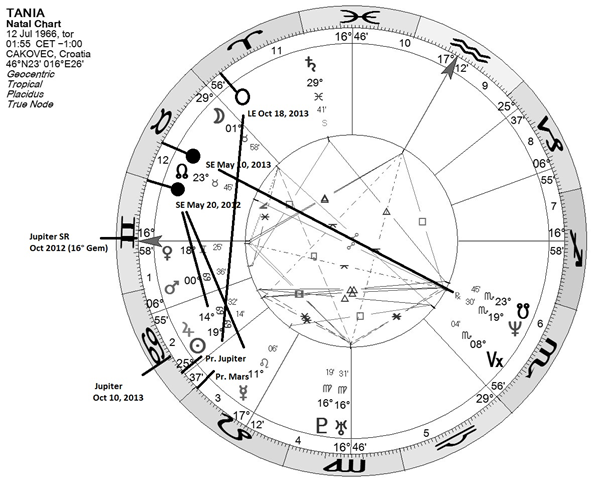 The »scene« for what was to come was set by the total solar eclipse of May 20, 2012 (which was accompanied by the astronomical Venus transit – the fact which may have added to the complexity and large publicity of the case). The eclipse was in a semisquare to her natal Jupiter, the 7th ruler, in sextile to her progressed Mars (natural ruler of lovers) and in semisextile to her natal Mars – all exact to one degree. This way, her life became ready to welcome a new lover/partner.

I may add that the accompanying lunar eclipse of June 4, 2012, which stretched itself along the 14° Gemini/Saggitarius and had Venus at 16 Gemini and Mars at 16 Virgo, all tightly linked to her natal configuration of ascendant /Venus/Uranus/Pluto, definitely played an important role here, but I ommitted it from the picture so as not to make it too clustered. Besides, the lunar eclipse only shows her strong emotional conditioning which preceeded the onset of the affair but does not point to an actual start of a new relationship, at least not in a clear way that the solar eclipse does.

When she met him, her progressed ascendant was in a very tight sextile with her natal north node, while the progressed Moon was at 21 Capricorn – in a conjunction with her progressed descendant at 23 Capricorn. Why didn’t she meet him (approximately) two months later when the conjunction became exact? Well the reason seems to be that at 21 Capricorn the Moon was in an exact sextile to the nearest solar eclipse which took place a couple of months later at 21 Scorpio. This degree already loomed large at that time and her progressed Moon simply »picked it up«, so to say. Timing can be complicated, indeed, but once we get eclipses into play, it gets easier. (Plus, of course, angles are delicate because we can never be totally sure of the exactness of the recorded time of birth. This could also have played a role here, although it must be said that birth times in our country tend to be taken down accurately.)

Her progressed declination graph (FIG 2) shows that two very important aspects were formed in 2012: her progressed Sun made a parallel to her natal Moon, and progressed ascendant was in a parallel to her progressed Jupiter, her 7th house ruler. This heavenly meeting of the Sun and Moon, the ancient symbols of »husband and wife«, shows how very important this relationship was to her. (For the sake of clarity, I have created her life declination graph – without the Moon – for 75 years of life. The crossings are thus more discernable.) 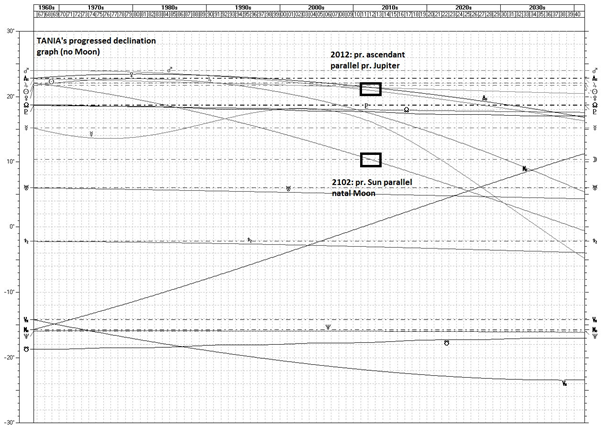 Transitting Jupiter, her 7th house ruler, came to be conjunct her ascendant in late summer/early fall of 2012 when their romance took off. It is fascinating, though, that it turned retrograde exactly upon her ascendant and in square of her natal Pluto/Uranus conjunction a little bit later – as if trying to say that what started at this time would end in disgrace – or in a tragical, surprising way. And this is what happened! Tania was never short of »proofs« that she was having the time of her life, but looking at that »disgraced« Jupiter, travelling through the »secret« 12th house (of scandal) and in its detriment, we can understand that the relationship involved »secrets to hide«.

Now, to the »downfall«.The annular solar eclipse of May 10, 2013 was in a very exact opposition of her natal Neptune. One could argue that Neptune is a »generation« planet, but then, again, it all depends on the exactness of the link. A 2 or 3 degree orb can surely not have the same effect as this very tight orb of exactly 1 minute of arc! (Eclipse 19 Taurus 31, Tania’s natal Neptune 19 Scorpio 30). Besides (and to make matters worse), her progressed node on October 1st 2013 was at exactly the same degree nad even (almost) minute: 19 Scorpio 32! This timing is just formidabble, don’t you agree?!

Neptune, when negatively aspected, is the planet of betrayal, loss, scandal, disappointment and disillusionment. No wonder that things developed as they did! Her discovery of his unfaithfullness was just a matter of time. It happened at the time when transitting nodes were exactly aligned with her vertex line, suggesting a »fateful« turning point in her relationship.

The final stage of her affair took place shortly before the partial lunar eclipse of October 18, 2013, at 25 Aries – the degree in an exact square of her progressed Jupiter at 24,5 Cancer, suggesting a (possible) break in her relationship. The fact that Jupiter is on cusp of her 3rd house of »communication«, explains why she chose, after she had awoken from coma, not to be silent but to disclose her whole story to her friends and the public (mass media).

But the strongest and most exact timing was provided by the activation of the eclipse (and Neptune) by the Mars transit. On September 27, 2013, when she discovered the ultimate proof of his lover’s infidelity, Mars (at 19 Leo) was in an exact square to the May 2013 eclipse – and to her Neptune and the progressed nodes, of course. This powerful activation momentarily broke her bonding – and drove her to her »grave«, suggested by the Mars position in her 4th natal house of ultimate endings.

Tania might have been dead today if the great benefic didn’t come to her rescue. In those late September and early October days, transitting Jupiter became exactly conjunct her natal Sun. As much as she wanted to end it all by dying, Jupiter and the Sun, strongly united, decided that she should live. And she does! On October 10th, the exact day of the conjunction, she (having returned from hospital) packed her bags and moved out of his place and back to her home. Relocation is another 7th house matter, and the symbolism is very strong again: Jupiter (ruler of the 7th – relocation) conjunct the Sun (ruler of the 4th – her home).